Water is every color on the earth and in the sky. It can be the hues of the sunset, a lush green field or the ever changing color of the seasons. Water is smooth like glass, it is rough, wavy or it displays the repetitive lines of a ripple. In an instant it changes texture and becomes a million little circles from the rain or stippled by ice.

This piece was inspired by the artists love for growing up in Perham, the heart of the Minnesota lakes area. It was created with a medium of carved concrete with elements of agates, fossils, fused glass and mosaics. Its design is to encourage interaction and communications among its viewers, both young and old, with over 50 items to seek and find. May you find something that sparks a memory or an emotion. As you discover Perham, Minnesota take the time to enjoy the colors and the textures that surround you.

Incorporated into the artwork are more than 50 items that evoke the history, culture and natural resources of the region. Can you find them all?

Many of the hidden objects were inspired by the artists’ love of Minnesota and their family. Find out the brief story behind some of the objects chosen. 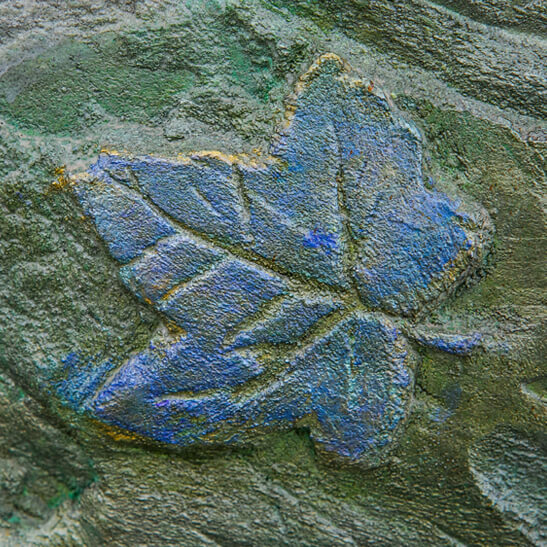 Leaf – Minnesota is full of coniferous and broad leaf trees. There are 9 leaves in this mural varying in Maple, Aspen, Oak, Elm and Birch. 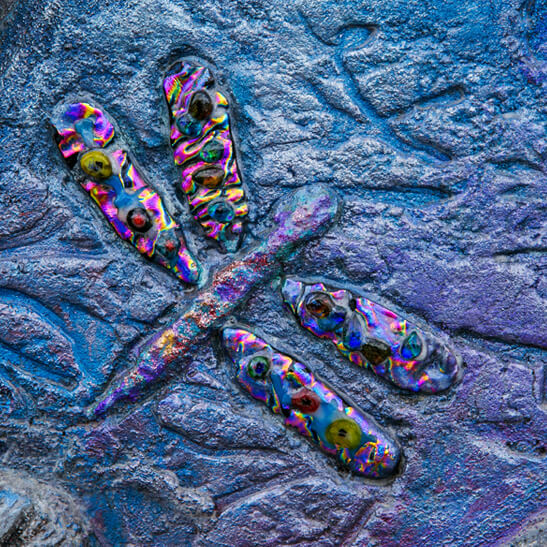 The turtle shells and dragon fly wings were made by layering glass and fusing in a kiln.

Name – Unable to resist scrolling ones name into wet concrete, the artist has delicately carved “Cindee” into this panel. 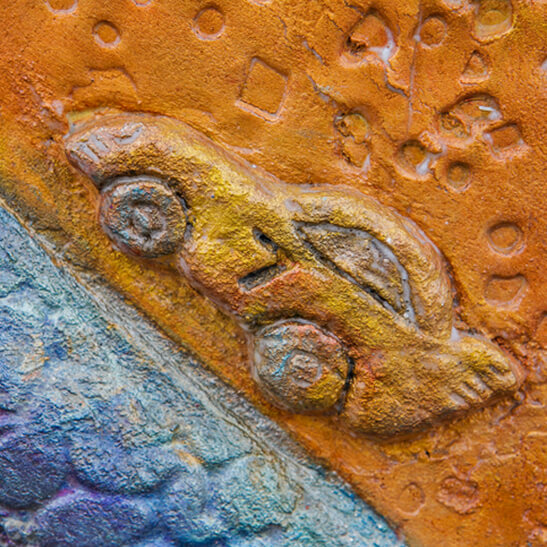 Race car – Perham, Minnesota has its own race theme it is the home of the International Turtle Races which attracts thousands of racers every summer from around the world. The 7 represents the age of the artist assistant’s son at the time the mural was made. 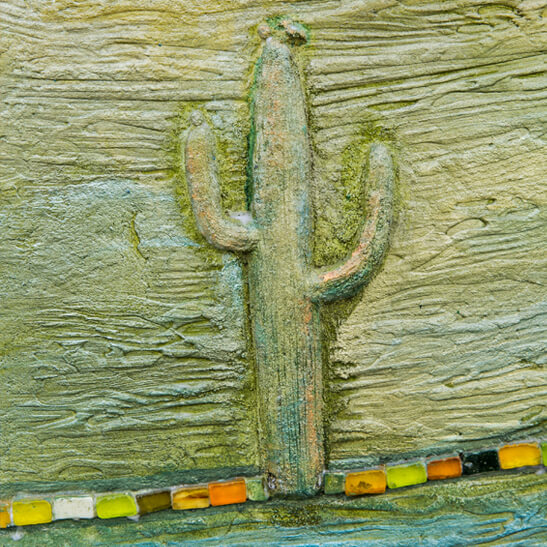 Cactus – The Saguaro National Park is located in Tucson, Arizona where the mural was created. This cactus is found in only a small portion of the United States.

Horseshoe – The artists’ Dad loved “throwing shoes”, the penny and dimes represent his passing and the dates on the coins are all 2014, the year the mural was constructed. 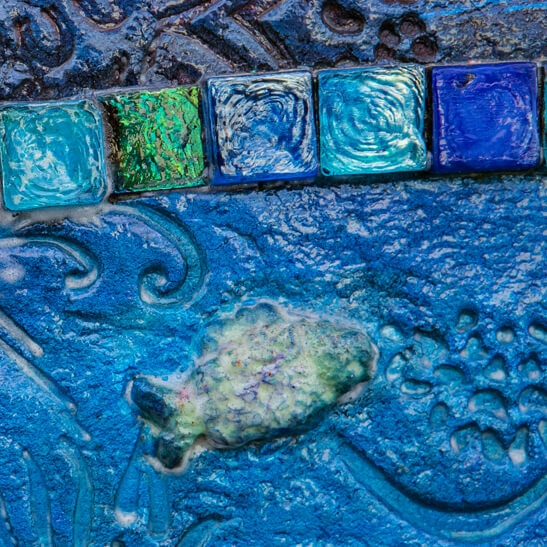 Glow Fish – The fish in this panel were made with glow in the dark flakes, which allow them to illuminate when the lights are out. 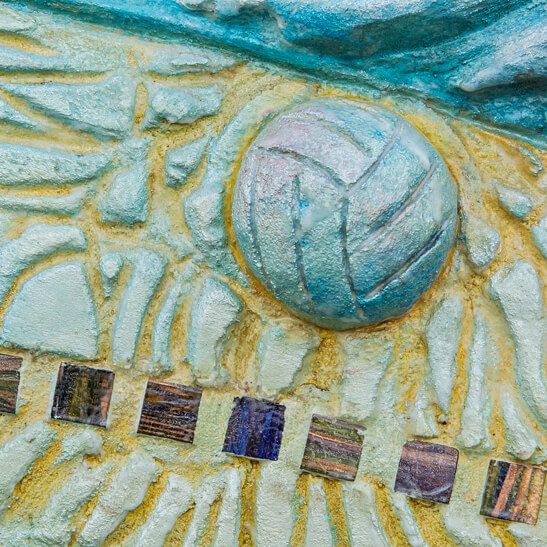 Time for Music & Wine – Everyone should find a way to unwind when life gets busy and for the artist it‘s to surround herself with loved ones, music and wine.

Volleyball – The ball was added for the project developer’s family whose favorite pasttime on the lake is a game of beach volleyball with friends and family. 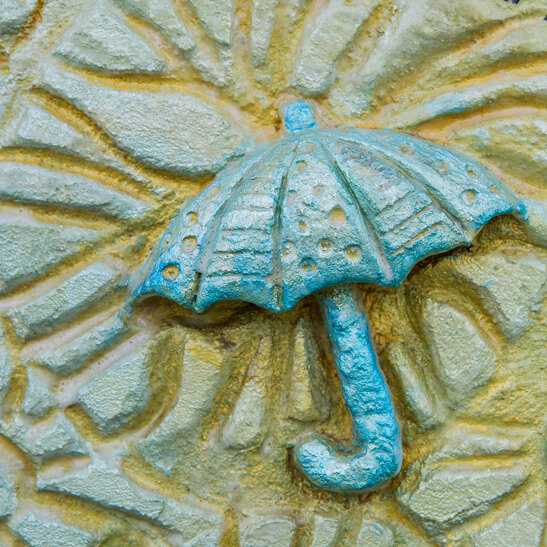 Umbrella – The umbrella is symbolic for the artist assistant’s last name which is “Pickrain”. Perham averages 26.3” of precipitation per year with rain and snow. 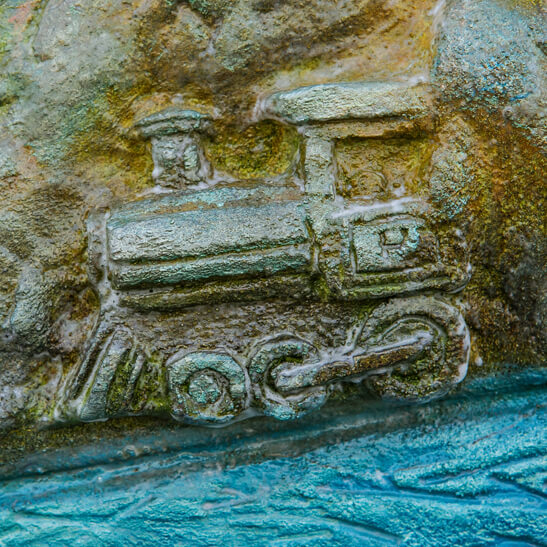 Train Engine – The village, now known as Perham, was officially incorporated by the state legislature on February 14, 1881. It was named after Josiah Perham, first president of the Northern Pacific Railroad.

Find out more about Perham and the surrounding communities at The History Museum of East Ottertail County located at 230 1st Ave. N. in Perham. 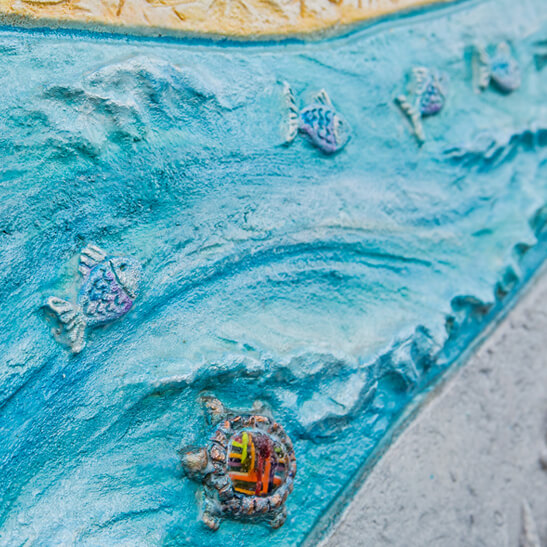 5 Fish – There are 162 species of fish in Minnesota lakes and Otter Tail County is home to over 1,000 lakes. This school of fish represent the 5 children in the artists’ family.

Tooth – The tooth in this panel was milled by a 3-D printer in Tucson, Arizona. 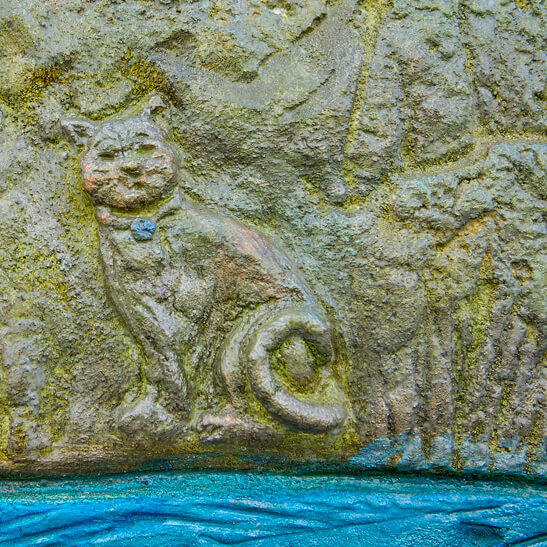 Anchor – The artist’s husband, son and father-in-law all served in the United States Navy. Perham is the home of many veterans who have served in our Armed Forces, including two sailors who perished on the U.S.S. Arizona in the bombing of Pearl Harbor. For more information please visit the ITOW Veterans Museum HACA Art & Events Gallery located at 805 West Main Street in Perham.

Cat – A small “L” is on the cat‘s tag to represent the artists sister’s family. 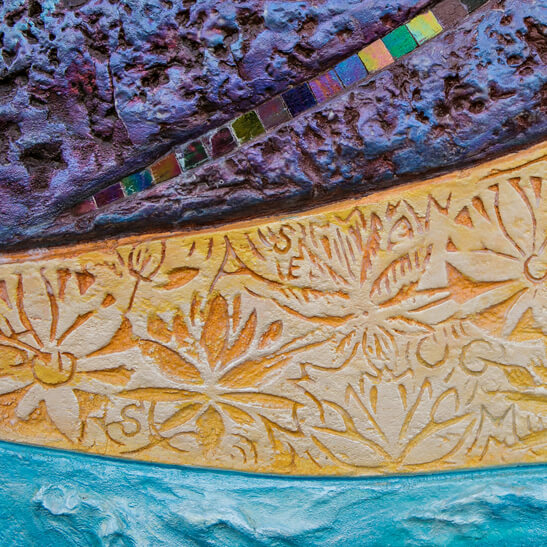 Initials – Like anyone, the core of the artists’ hearts revolve around family and friends and the initials represent many of their loved ones. 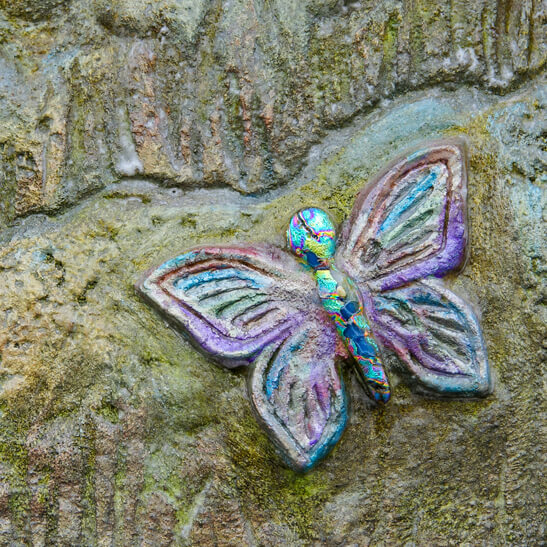 Ha, Ha, Ha – The artist hopes you find laughter in life as much as she has with her family and friends.

Butterfly – This butterfly was made a little extra special with fused glass for the artists’ aunt who has fondly been known as “The Butterfly Lady”.

Shells – The artist has many fond memories of searching for shells on the shores of Minnesota lakes. These shells represent both those fun summer afternoons and also for the artist’s brother’s family who now reside on the East Coast.

Heart – This shape was added for the artist fond love and admiration for Perham which will always remain a piece of her heart although she now resides in AZ. 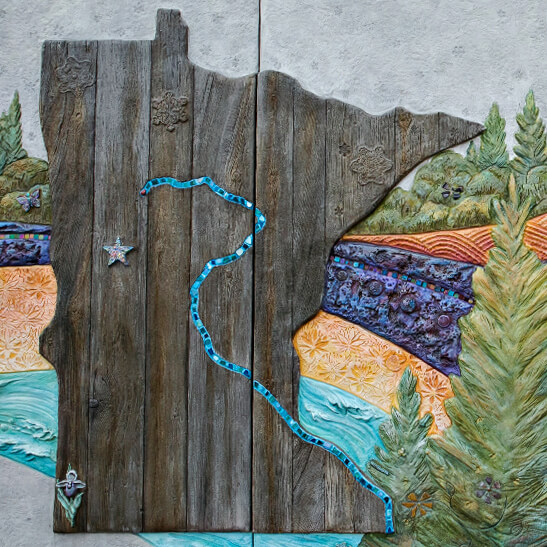 The loon is the state bird.

The state flower is the lady slipper.

It is nicknamed “The North Star State”. 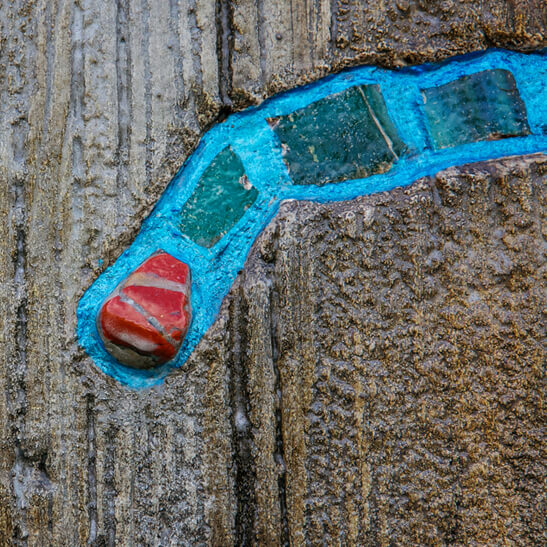 Minnesota is considered one of the 5 coldest places on earth reaching a record −60 °F air temperature in 1996 and a record seasonal snowfall of 170.5” in the winter of 1949.

Minnesota is known as “The Land of 10,000 Lakes”, but officially there are 11,842 lakes. Minnesota has 90,000 miles of shoreline, that’s more than California, Florida and Hawaii combined.

The petrified algae stone marks the spot of the start of the Mississippi River in the mural, it is called Mary Ellen Jasper, which developed in the Iron Range over 2 billion and 300 million years ago. 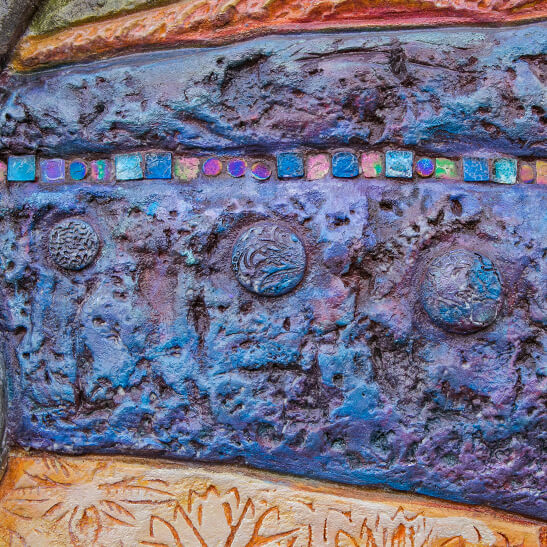 Planets – The artists and their family grew up enjoying and learning about the night sky, influenced by their older brother’s love of astronomy. The planets are in order to the sun: Mercury, Venus, Earth, Mars, Jupitar, Saturn, Uranus, Neptune and Pluto. As of August 2006, Pluto was demoted to a dwarf planet and no longer considered a planet in our solar system due to being too small. 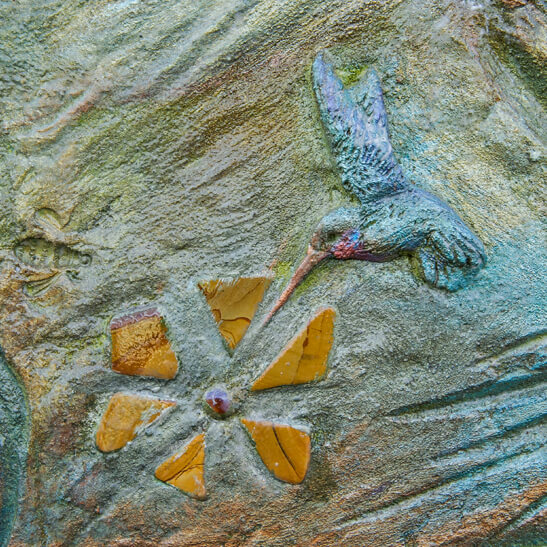 Dinosaur – The most common fossils found in Minnesota are of small marine organisms and from the hadrosaurs, or duck-billed dinosaur.

Hummingbird – Many bird watchers look forward to spring and the return of many species of migrating birds, one of which is the ruby throated hummingbird, a favorite of the artists’ Mom.

Texture – The golden and orange texture is hand sculpted by pinching concrete between fingers. It is there to resemble the rolling hills of the farmlands that so beautifully surround our Minnesota Lakes. 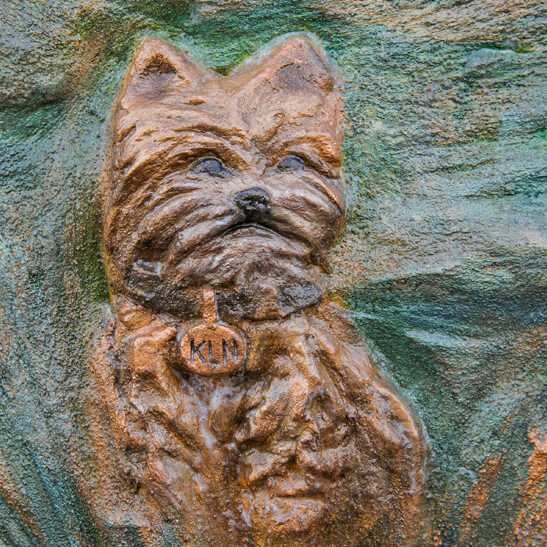 Dove – The dove is symbolic of the artist’s assistant’s first name which means “White Dove”.

Dog – The dog in the mural is Suzy Snickers, named after the Yorkie owned by the project developer who once saved Suzy’s life by giving her mouth to mouth resuscitation. 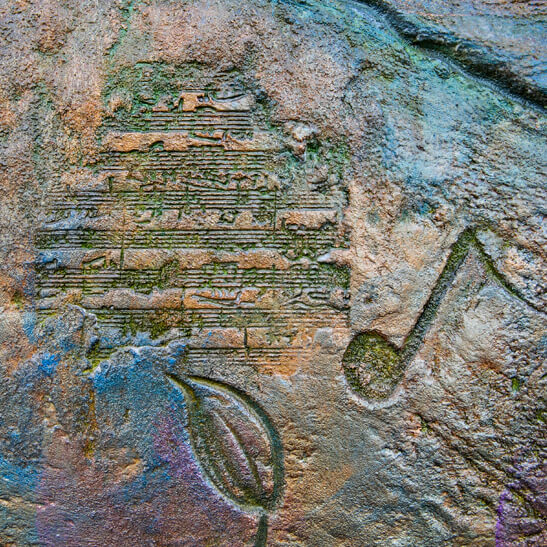 Cupcake – The cupcake was made for the artist’s daughter, a professional baker, and her husband. The bundt pan and Bisquik were both invented in Minnesota.

Music – This melody was made for the artist’s son and his love of music. Minnesota music began with the Native rhythm and songs of Native Americans. Famous musicians from Minnesota include Bob Dylan, Prince and The Andrews Sisters.